Here is an article I wrote for the VC On Stage website: 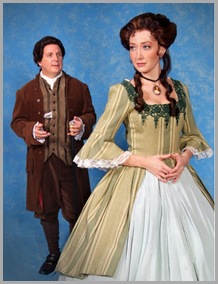 One of my most favorite musicals I was blessed enough to perform in was the historically based 1776. I remember when I was prepping for auditions how closely related I felt to the character Abigail Adams. Although my peers said I was a perfect Martha Jefferson, I wanted Abigail. She was a woman of strength and compassion and independence. In a way, one could say she represented the soon-to-be country’s independence John Adams was fighting for.

By studying the character through historical accounts from a history major and the letters she wrote to her husband, memorizing songs and scenes from the show itself, I walked into the auditions as Abigail. And was lucky enough to convince the director, Nick DeGruccio, and musical director, Steven Applegate, to believe that I was too. So when my agent called to tell me I got the part, you can imagine how ecstatic I was.

Where is the nightmare? Just wait…

To read more, please click the link: An Actor’s Nightmare: VC On Stage

One thought on “An Actor’s Nightmare”

This site uses Akismet to reduce spam. Learn how your comment data is processed.